5 TOP tips for working with teens

Dealing with adolescents can be problematic but there are ways to enhance your relationship with them even during difficult times.

OK, working with teenagers is not easy, even someone with the leadership skills of Scott of the Antarctic, the personality of Oprah Winfrey and the moral authority of Nelson Mandela would have a hard time convincing adolescents to get up on time in the morning or tidy their room. Teenagers often see thing differently from older generations and so disagreements are common. On the rare occasions that they do agree with you they probably don’t want you to know that, and certainly don’t want their peers to. As the metaphor suggests working with teens really can be like herding cats. Just cats that are often bigger than you and like to argue. A lot.

So where do you start? Here are my 5 top tips:

Yes I know this is difficult. Some days (weeks) I don’t even like my own children let alone other peoples. If you are a teacher you can’t like all of them and certainly you can’t like all of them all the time. But if adolescents don’t actually feel we view them positively we will have little favourable influence on their lives. It is highly unlikely that an adolescent is going to remember even 1% of what you say to them, but they are going to remember how you made them feel. This doesn’t mean you have to be nice to them continuously but they have to understand that you have their best interests at heart. In his book ‘Brainstorm’, Dan Siegel warns that we must be careful of seeing adolescence as a time just to be endured and instead appreciate the importance and value of this age and stage. The good news is you can practice liking teens (try it) and improve your ability to do this. If you really don’t like them, and feel you can’t get better, then don’t work with them.

When I speak to teens in trouble their biggest fear is not what punishment
they might receive but rather what the reaction of their parents will be. And in their minds the most dreaded words that parents can utter are, ‘I’m not

angry, I’m just disappointed’. Seriously I think they would rather we were angry than disappointed. To feel ashamed, to be shamed, is an experience that teenagers take significant steps to avoid, including keeping things hidden from us. While some shame is unavoidable and appropriate, persistent shame or excessive guilt is unhealthy and can make a problem worse rather than better. My own son reminded me of my own failings in this area just the other day (he has a gift for that). In all seriousness I don’t remember explicitly using the ‘D’ word with him but teens are so hyper-sensitive to parental disappointment and associated shame that he heard me say it anyway. A feeling of shame is one of the reasons why teens sometimes find it hard to talk to adults, they don’t like being judged. Just like us they need to be allowed to move on from their mistakes and failures.

In their book ‘Nurtureshock’, Po Bronson and Ashley Merryman expressed the following sentiment that I believe is more often true than not. “If your teenager isn’t arguing with you then they are lying to you.” From my perspective if a teen takes time to argue with you it’s a sign of respect. You are significant enough to them that they want your approval or permission and they value you enough to seek your validation of their opinions or behaviour. You don’t have to by the way, but if you don’t allow space for this dialogue (as a parent in particular) then your teen is going to politely lie to your face as you are laying down the law and then quietly get on with exactly what they want to do (actually not so much quietly, just out of earshot). I hate to say it but the primary school days of control (if they existed at all) are over, your best bet now is influence.  Dealing with young people can seem to be a constant process of negotiation and re-negotiation as they rapidly change and develop. It’s exhausting but despite the effort this takes, it is important to give them their say and a little leeway while maintaining firm boundaries.

Anyone who has worked with young people knows that an eye roll as opposed to drum roll is the more likely reaction to even the most exciting plans you have for them. There are none better at appearing disinterested than teenagers. OK a lot of the time they really are disinterested (it’s not the teachers’ fault that Coriolanus is the English set work again) but when dealing with difficult adolescent issues that blank facial mask can appear faster than acne in a fast food outlet. Be grateful if it is just boredom you’re dealing with though, it could be teenage rage. Sometimes when adolescents get angry it’s because, well they’re angry. But at other times it’s also because they are sad, lonely, depressed, afraid or overwhelmed. Anger is often a conduit for a range of other emotions particularly among boys.  I know that it is often those scowling, frowning children at the back of the classroom who are grappling most with life. Sometimes though it’s those who make the least fuss that need the most help. ‘I’m fine’ does not always mean ‘I’m fine’.  Most adolescents give clues that they need help, but we have to pay attention. If what they say is not congruent with their facial expressions, body language or typical behaviour then don’t believe them. Listen to what they are not saying and trust your gut. 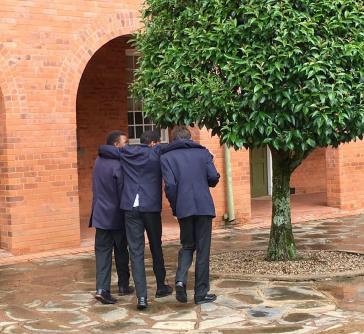 thing is as dreaded (or as ineffective) as the parent or teacher lecture. I have teenagers sit in my office and tell me almost word for word what their Dad, Mum or teacher is going to say about a particular situation (poor school report, drinking episode, etc.). At this age you just don’t need to say it anymore. If you have been involved in their life, your child has introjected your thoughts and feelings on almost everything. What they have to do now is internalise this, that is,decide if they want it for themselves. So ask them what you need to ask and then wait for the response, and when I say wait, I mean wait. Boys in particular may take some time to put their feelings into thoughts and then thoughts into words (literally days sometimes). Girls may react quicker verbally but they also need time to talk through their feelings before they settle on a response. Don’t be afraid of long silences or conversations that take place on and off over a period of time. You need to give them space to express where they’re at (See point 3) or you’ll make no real progress.

Given point 5, this seems an appropriate place to stop for now. In addition my aforementioned gifted son has just asked the question, ‘Is anyone is even going to read this and if they do are they are going to continue to the end?’ It seems a fair point, plus I need to go and practice liking him again.