Health and safety has not yet reached the epidemic proportions here in South Africa that it undoubtedly has in the United Kingdom. However it is making its well-meaning but sometimes counterproductive presence slowly felt, to the point where we recently had a whole school fire drill. Not that we don’t have these but this time in order to ensure we maintained our safety rating we had the full Monty, complete with ambulances, fire engines and simulated injuries. 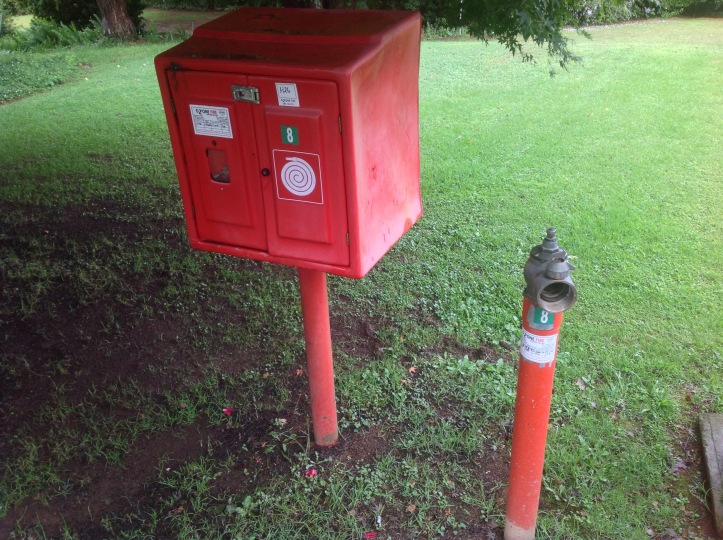 In order to receive the necessary accreditation the whole community of more than five hundred students, teachers, staff from the laundry, kitchen and grounds had to be present and accounted for within fifteen minutes from the initial sounding of the alarm. A time was set, a managed fire lit and five ‘bodies’ to be rescued placed randomly around the school premises. All was ready.

It did not go well.

To start with the alarm, which typically sounds like a World War 2 air raid siren, did not work properly. It is usually guaranteed to send you running for cover while scanning for enemy aircraft overhead, but in this instance was barely audible, particularly if you happened to be teaching 9E at the time.

Once the alarm was finally raised, the school duly made its way onto the front lawn for the register to be taken. Once there they were treated to a number of spectacles. The first was one of the ‘bodies’ on the school roof who had to be wrapped in material, presumably to treat some fictitious burns, being winched to the ground. The other was the sight of the Head Master, who had for some reason been nominated to put out the fires, perhaps because this is something he does a lot of, attempting to manhandle a fire extinguisher that seemed to be suffering from performance anxiety. Both of these acts took considerably longer than I suspect they were supposed to. To be fair it did not help that the ‘body’ on the roof was clearly alive and well and somewhat terrified of being lowered over the edge of a building while rendered immobile in plastic wrapping and strapped onto a stretcher. In defence of the Head too he did miss last year’s Safety Training course and it turns out that his extinguisher was almost empty. Nevertheless these events served the unintended purpose of keeping the growing crowd fully entertained and manageable until all were accounted for and the drill was complete.

The problem of course was that not everybody was accounted for. In fact a whole class was missing. One teacher, bless him, had decided that the whole exercise was at an inconvenient time and simply carried on teaching regardless. Once this group was found it was then discovered a second teacher was missing. Fearing he had succumbed to the imaginary flames the authorities searched for him for some time before discovering him at home with his feet up where the only heat he was experiencing was of that emanating from the cup of tea he was enjoying, oblivious to the chaos he had left behind. It turns out the fire drill conveniently preceded a couple of free periods, so he had simply sent his class off and walked home to enjoy an extended break.

While all of this was going on one of the designated fire marshals whose task it was to check that the boarding houses were empty, radioed for help, trapped inside a building. Not sure if this was part of the simulation or not, the authorities responded with reassuring alacrity. It turned out that the marshal had indeed been imprisoned as a door had closed shut behind her and she lacked the necessary finger print access to make an exit.

Meanwhile someone had neglected to tell the surrounding community that a drill was being held. This might not seem like much but in a rural area predominantly consisting of forestry and farm land and at the end of a long hot dry spell, the risk of wildfires is a real one. The very thought of fire is enough to get the local farmers sweating and so when seven emergency vehicles roared into the local vicinity with blue lights blazing, phones started ringing. Tempers, if not flames, flared and the Head Master had to get involved in some more firefighting.

When all is said and done it seems we are going to be awarded our certificate. This is a pity, I was rather looking forward to having to do the whole thing again.